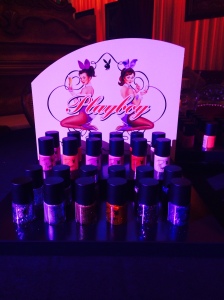 So thank you to my beautiful friend PR Guru and Journalist Sophia Mead. I was taken along to the Playboy Makeup Launch set in the ever so appropriate Playboy Club, Mayfair.

As we glided in the doors trying to look as fabulous and famous as ever, handed a glass of champagne, the first thing we laid our eyes on was a long legs and bunny ears. Yes fabulous and tiny waisted playboy bunnies handing out champagne (remind me to go back to the gym and no carbs for the rest of my life). The room was lit in a reddish backlight which almost took me back to the Mr Greys Red Room, the chandeliers hanging and the voices of all the PR team making you feel like you are royalty.

The products I have to say are fantastic, for the price you pay, we were told it will be available in Superdrug for £7.99 upwards which is not bad for the brand. Now of course we tried and tested while we were there and I was rather pleasantly surprised and such a wide range of colours for their lipsticks. Normally I would associate playboy with bright bold statement colours but in addition they had some wonderful nudes and browns which were suited to my Indian skin. 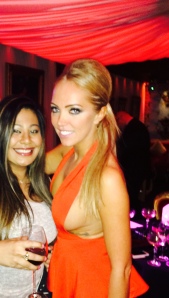 The night was hosted by a slightly worse for wear Bianca Gascoigne and Aisleyne Horgan-Wallace who decided underwear was not necessary and ended up flashing her bits to the media after they left and continued partying through the early hours of the morning.

Ah my favourite part about a launch is the goody bag, ours was filled with 3 Lipsticks, 3 nail varnishes, 2 mascaras, one bronzer, one blusher and some other bits. So far I have tried the nail varnish which was a beautiful hot pink but slightly runny so I would still stick with my OPI. However the blusher is my favourite the printed pattern gives you a unique defined blush with a slight glow, which highlighted my cheekbones and made my face look skinny (I mean who doesn’t want that right?) All in all the products are good and I rate them a 8/10. 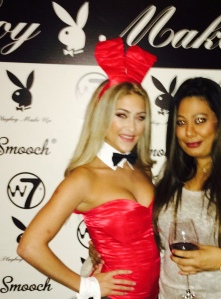 The night on the other hand I would give a good 10/10 the atmosphere and the people really made the launch; it wasn’t too crowded also so we managed to speak to other magazines, and the actual PR Company (Aqua PR). They made an effort with each and every person which I know is their job but I like! Especially as I am a nobody in the business.